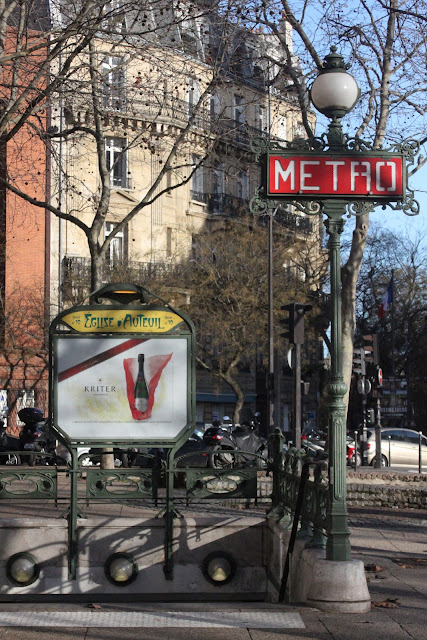 When I surfaced from the Guimard designed Eglise d’Auteuil metro station, there was a sense of serenity, a gentle hum, unlike the bustling crowds of Le Marais.

The Auteuil quarter, in the westernmost part of Paris, a former town, between the Seine and the Bois de Boulogne, is now a part of Paris.

Rue d’Auteuil, was the town’s main street and has a village like atmosphere, as I strolled along,  observing well heeled shoppers, buying up last minute Christmas supplies. 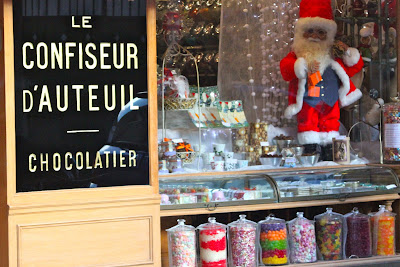 In an area where Marcel Proust was born, Moliere lived,  luxury villas that were built on the former country estate of Comtesse de Boufflers and Hector Guimard’s beautiful decorative architecture can be savoured, there is plenty to absorb and admire.

Happening across some of the buildings, I actually found myself gasping out loud.  Especially Guimard’s Castel Beranger building. 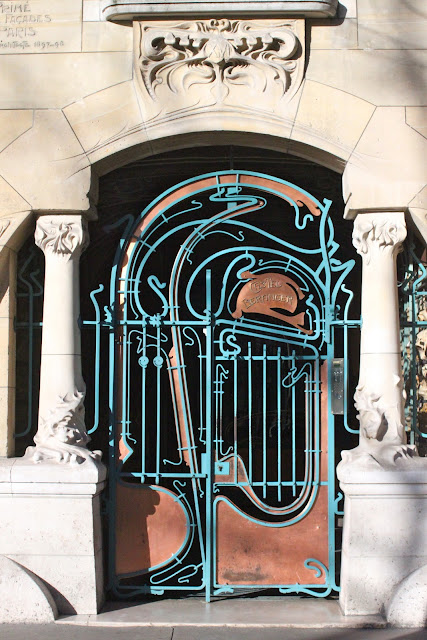 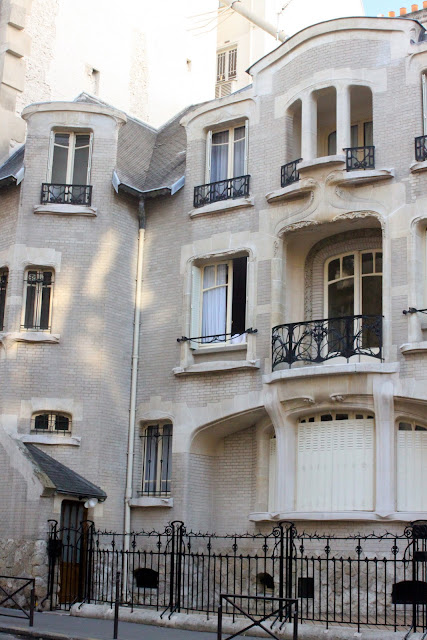 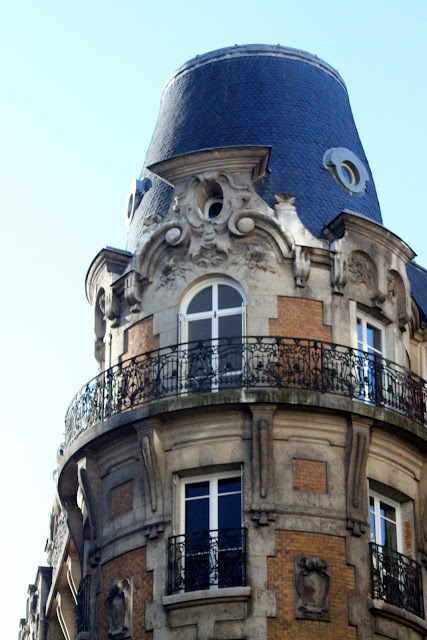 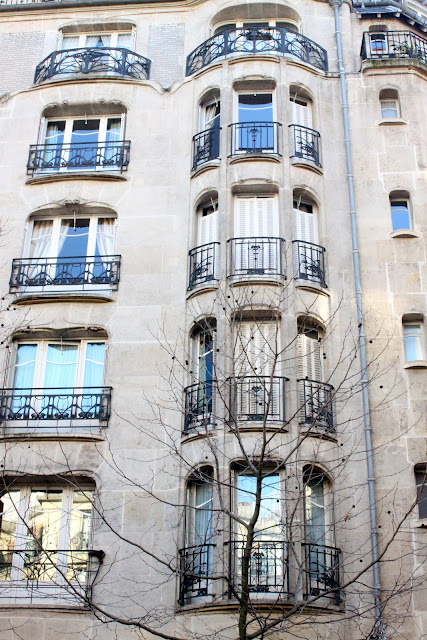 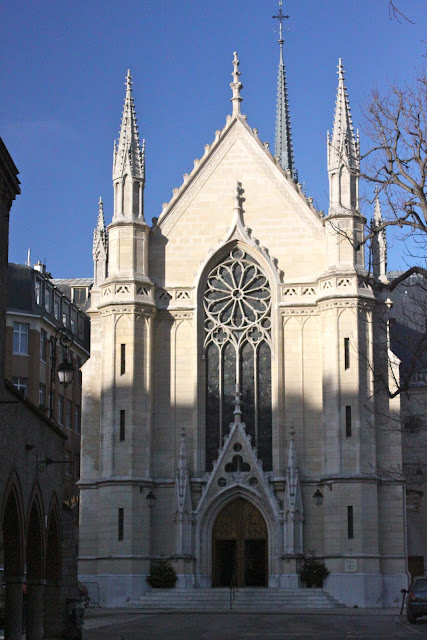 Disappointed that Rue la Fontaine finally came to an end, I turned right and headed for Pont de Grenelle.

Standing on Pont de Grenelle,  if you look left you can see the Eiffel Tower and right, a replica of the Statue of Liberty, as if it was emerging from the Seine. 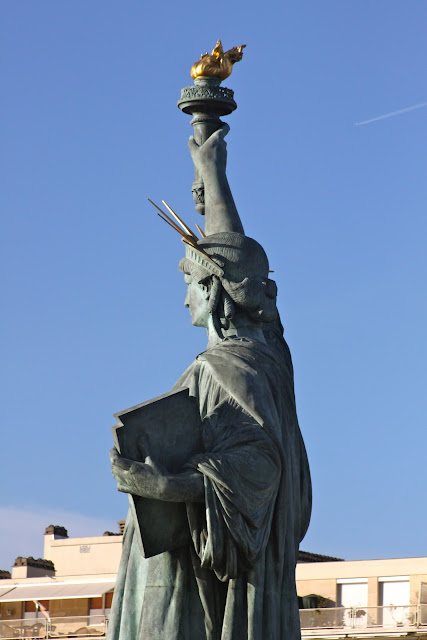 Heading back to the quiet streets of the Auteuil and down rue de l’Assomption, more bourgeois apartment buildings are to be found. 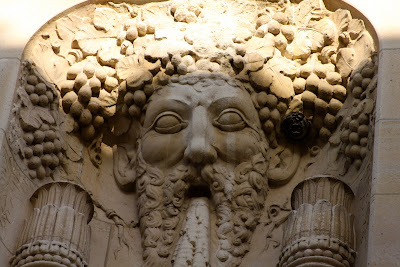 My walk was coming to a close but not before a little surprise.   At the end of Rue du Docteur Blanche is Le Corbusier’s Villa Roche.  Built in 1923 and way ahead of it’s time. 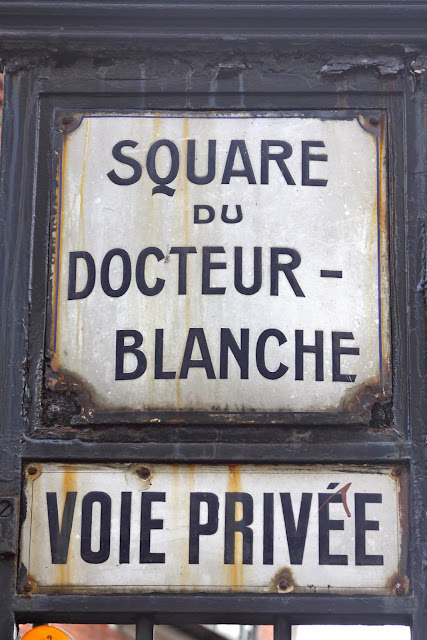 I was asked to put little plastic booties over my shoes and allowed to wander around the spacious ultra modern villa.  With bright open spaces, large voids and curving lines, it seemed almost incomprehensible that it was built so long ago. 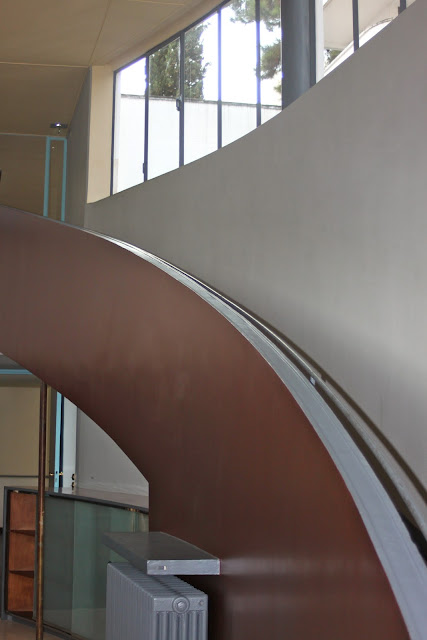 One last piece of fine architecture to observe before I left the beautiful, charming area of The Auteuil. 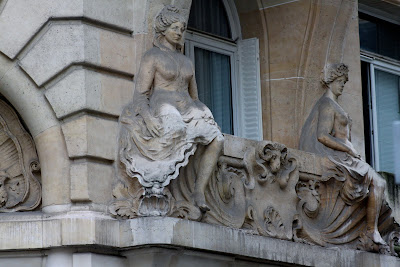 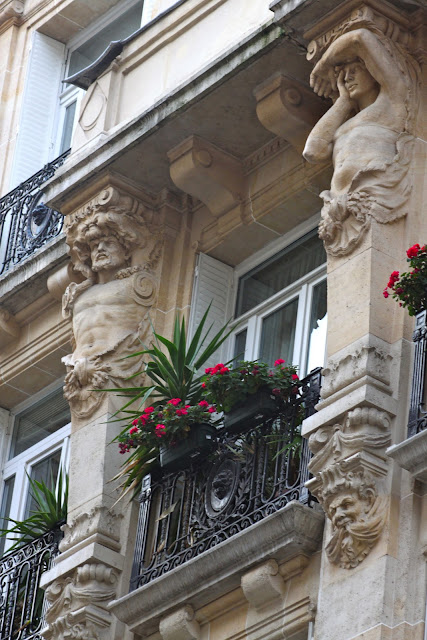 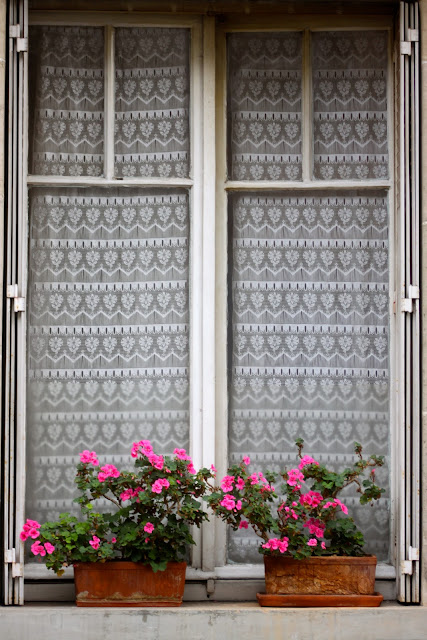 As fate would have it, I ended up on the wrong metro line and decided to get off at Bastille and take a chance to see if my favourite food market, Marche d’Aligre was open in the late afternoon of Christmas Eve.

Thankfully it was.  There is a certain cheerful, friendly air about this market maybe that is why I love it so much, or maybe it is the fabulous food on offer, probably both.

When I bought some roast pork for one, the butcher offered, I could buy for two and have him over for dinner!

Armed with a slab of fresh butter, goats cheese, potato gratin and roast pork for one, I rushed back to the metro.  I needed to get back to the apartment and get ready for the Ballet at the Palais Garnier.

As I scurried down the street, a familiar face lit up.  Chere, he calls out.  The homeless man, who I met last year, was sitting at his usual post, now on a new, bright and shiny silver chair.  Looking a little worse for wear, braving the winter elements, he still managed to have a cheery disposition.

He cheekily offered I buy a bottle of champagne and have a Christmas drink with him.

Apres – later,  I said, as he so often called out to me last year.  He kissed my hands and wished me a Happy Christmas, as I headed on my way.

How to finish off a wonderful day?  Ballet at the Palais Garnier. 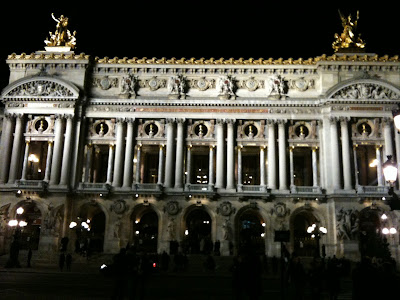 Palais Garnier, probably the most famous opera house in the world, oozes opulence and history.

Initiated by Emperor Napoleon III, an architectural competition, won by Charles Garnier, where it takes it name, overseen by Baron Haussmann, the setting for The Hunchback of Notre Dame and seating 1979 people, is a sight to be seen and an experience to be had. 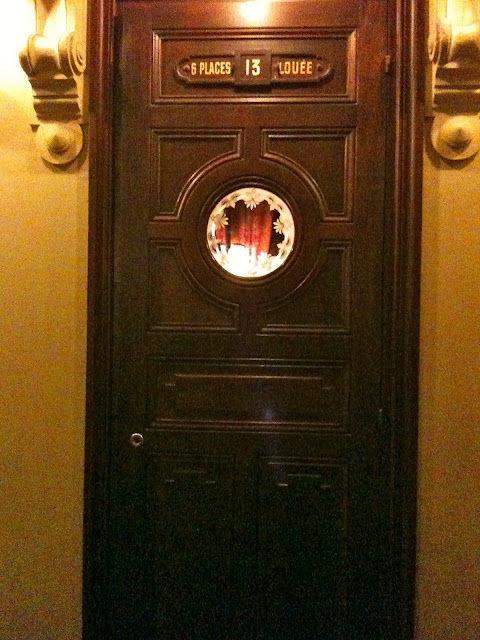 When I booked the ticket, I chose a balcony seat.  What I didn’t know, it was in a box.  A gorgeous, plush, red velvet box with magnificent views.

As I strolled around Palais Garnier, taking in the surrounds, observing, men in suits and beautiful women in lovely gowns, sipping on champagne, I was in awe. 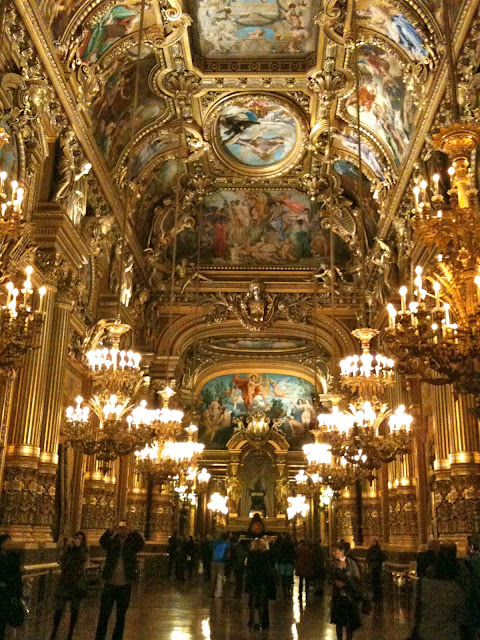 The magnificent 7 ton, crystal chandelier, also designed by Garnier and costing 30,000 gold francs, at the time,  is set high above, hanging from the spectacular ceiling.  I couldn’t help but wonder, how they change the light bulbs! 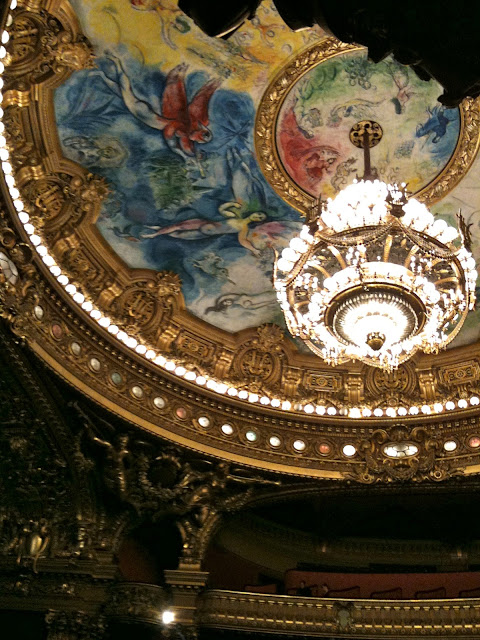 The bill was Onegin, the night was superb. 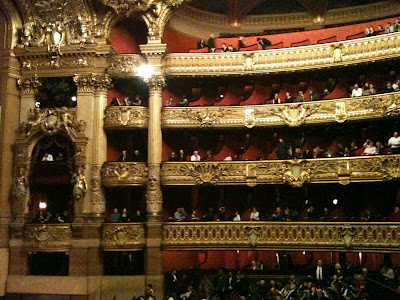 Pierre kindly offered to meet me for dinner after the ballet.

It seemed surreal, to have to line up for dinner at 11.30pm on Christmas Eve but that is what we did.

Le Grand Cafe Capucines, just around the corner from the Palais Garnier was jammed packed with diners.

Finally, once we were seated, we dined on a hot bowl of soupe de poisson,  a massive piece of magret de canard and fine French wine.

What a way to finish off Christmas Eve in Paris and see in, Christmas morning. 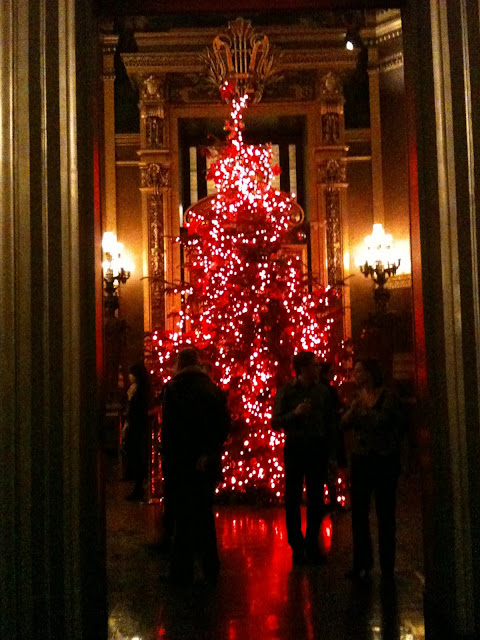 2 Responses to Christmas Eve In Paris