Paris is Photogenic, in any Weather

Home » Blog » Architecture » Paris is Photogenic, in any Weather 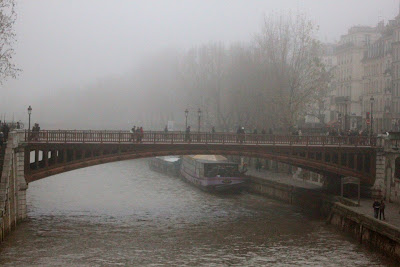 The temperature plummeted and a blanket of mist hung over the Seine today.

Heading over to the rive gauche, the left bank,  to explore the 6th arrondissement, with the chilly wind whipping around my face and the cold stinging my fingers, I pass the Notre Dame on the way.

But not before a quick pause.  Each and every time I pass, I stand on the pave, before continuing on.

Legend has it, if you stand on the gold disc, that is embedded into the pavement in front of the Notre Dame, you will return to Paris.

This has become a ritual for me, to ensure she allows me to come back and visit again. 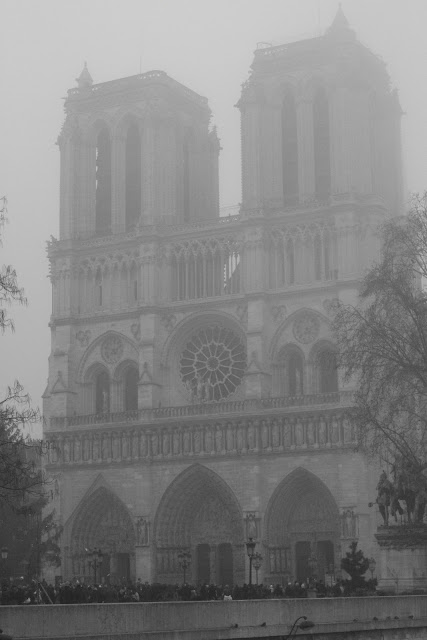 As I cut my way through the 4th arrondissement down the bustling,  Boulevard Saint Michel, to enter the 6th, where I would spend the day, I found a quiet little passage I was looking for. 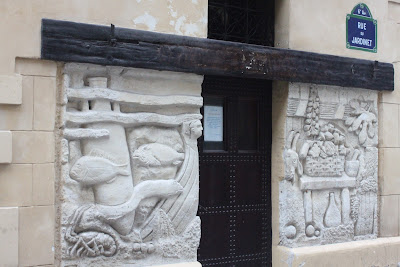 Paris is full of little alley ways, passages and court yards, you just have to be lucky enough to either come across them, or know where they are. 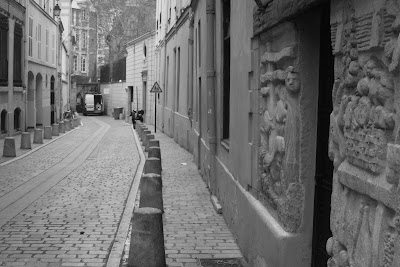 It was difficult to imagine that only a street away, people were out in the droves, unaware of this quaint, short cut.

The only noise, some rustling autumn leaves that scared the life out of me.
Knowing this passageway leads into three private courtyards, I was a little nervous that I might be shooed away.

Entering through the iron gates into the first courtyard, felt like I was entering a secret world.  Not a sound or soul around. 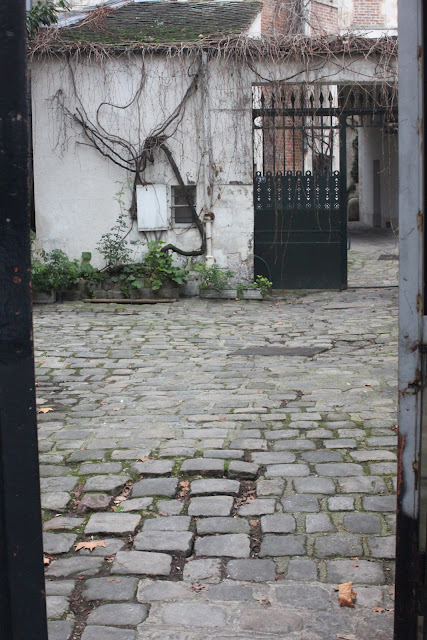 Now called Cour de Rohan but once, Cour de Rouen, after the archbishops of Rouen who lived here in the 15th century, is a magical little spot. 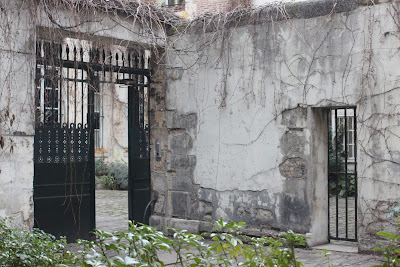 The middle courtyard has a three legged, iron mounting block. These were used for older women or overweight people to mount their mules.  Apparently it is the only one left in Paris. 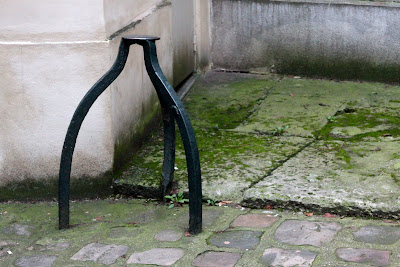 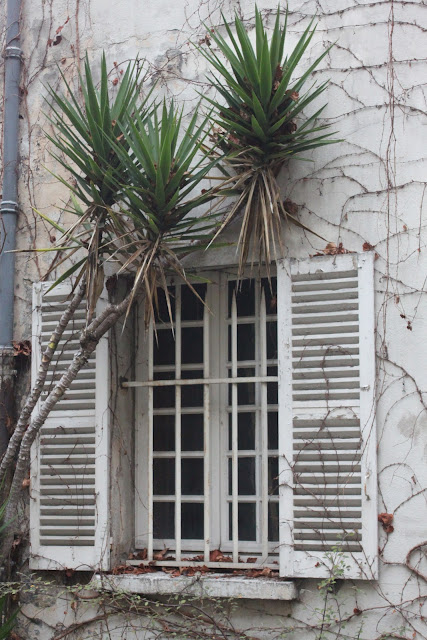 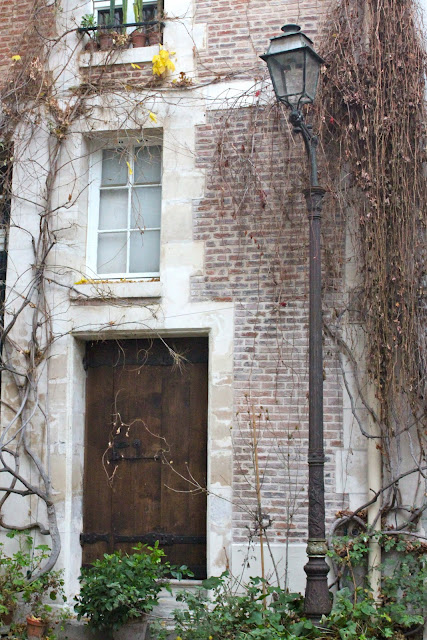 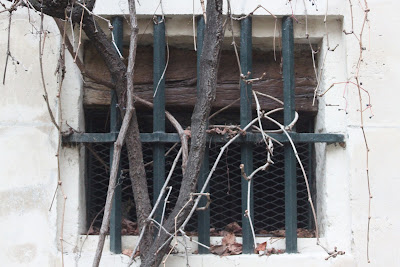 The third and final courtyard leads out to Cour du Commerce St Andre. 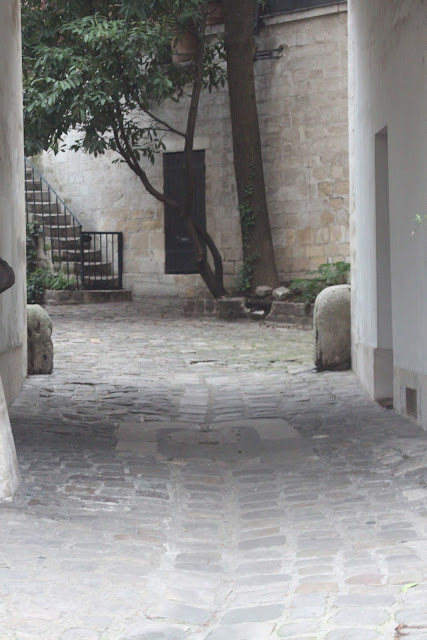 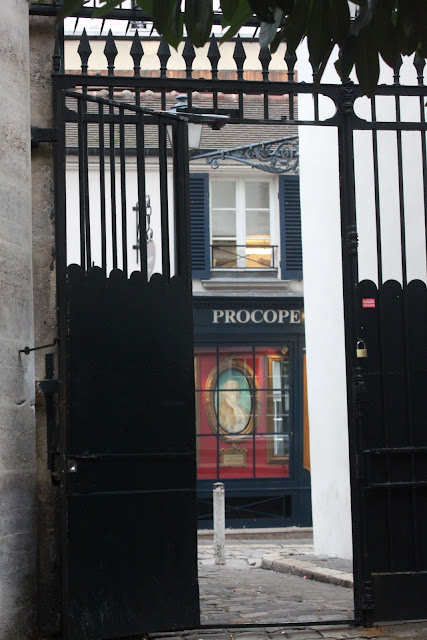 This is where, the world’s first coffee house, Le Procope, can be found.

Last year, I had lunch here and accidentally ordered medium rare kidneys, instead of veal.

Cours de Commerce, a lovely cobbled street that leads into a covered passage way is where at #9 Dr Guillotin invented the guillotine. 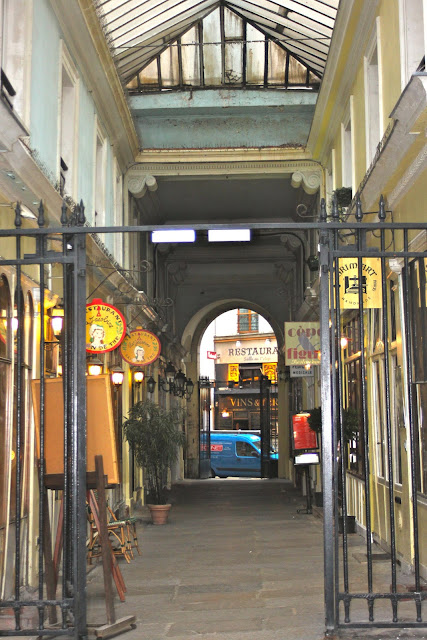 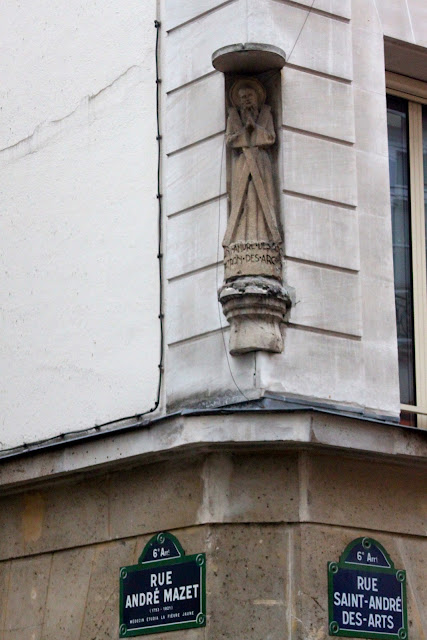 A girl can’t do too much walking around in Paris, in the cold, without a spot of shopping to warm the body and put a bounce in her stride. 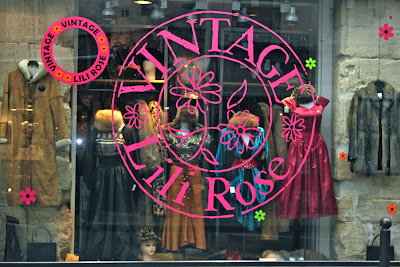 You can’t miss the black and pink signage and great window displays.  If it is fur you want,  they have it.

Racks of Fur coats, trunks full of fur hats and boxes full of fur scarves.  Vintage handbags, gloves hats for both men and women and a lot more.

I couldn’t resist a fur scarf, that seems to have a life of it’s own,  and keeps wandering around my neck.  Maybe it is because it has a tail and feet at both ends!

The store is organised, unlike a lot of vintage clothes stores, reasonably priced and the girls are lovely and speak English. 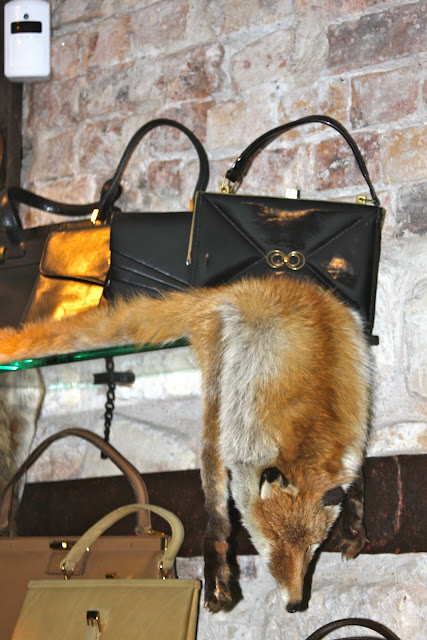 They had some fabulous over the knee boots but I resisted.

Refreshed after a bit of shopping, I moved along to the oldest church in Paris, St Germain-des Pres, first built in 542 but the current church dates back to the 11th century. 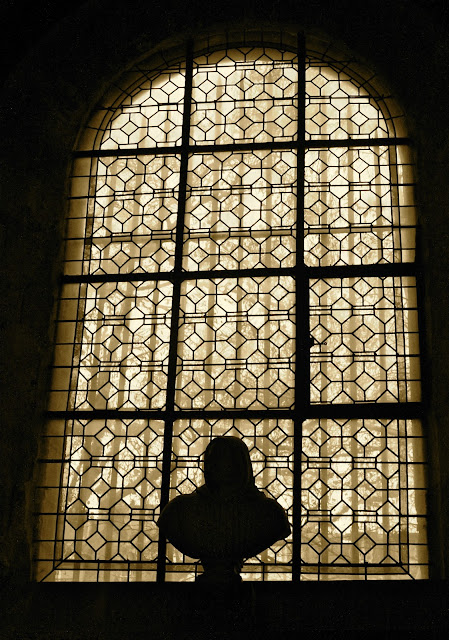 Feeling a lot warmer, with my new fur scarf and spending quite some time in St Germain des Pres, I braved the chilly wind, once again to see a square that features in a lot of movies. 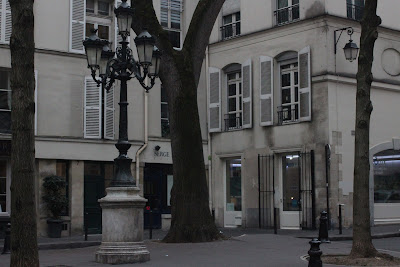 Leading off Furstenberg Square, is another quaint, quiet street. 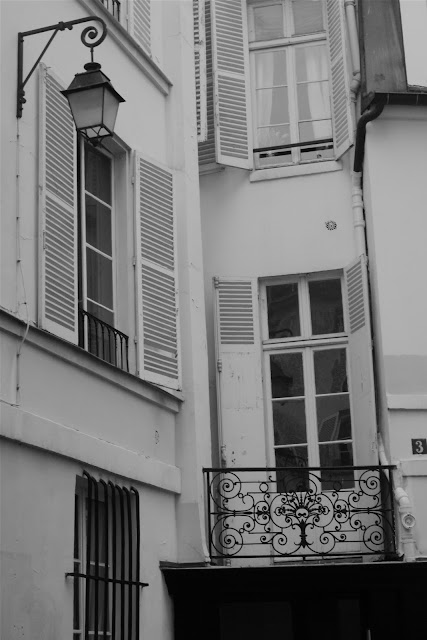 St Sulpice church, the 2nd largest in Paris after the Notre Dame, and took over a century to build, was my last opportunity to get in from the cold before I ended my day in the 6th Arrondissement at the Luxembourg Gardens and headed home to get ready for a night at the Chatelet Theatre to see The Sound Of Music. 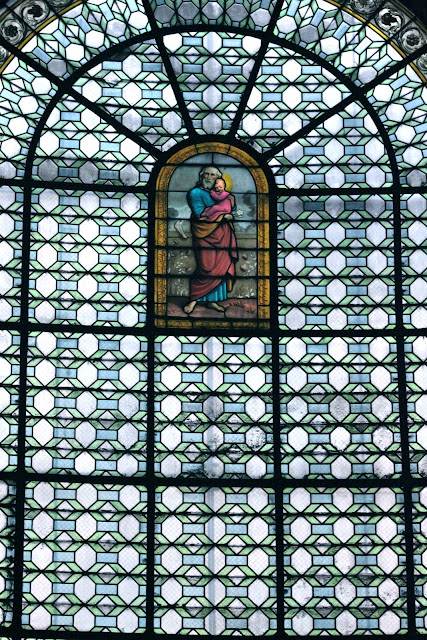 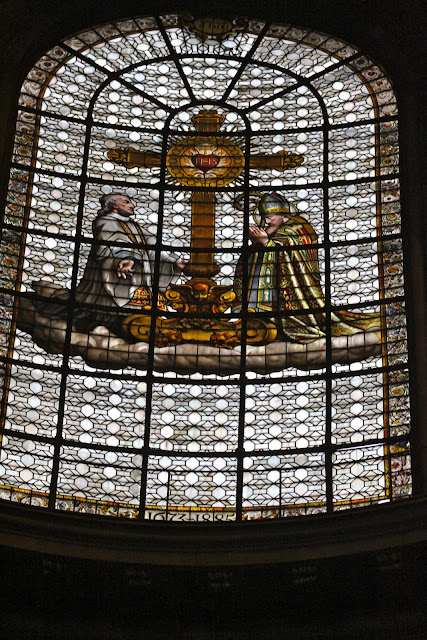 Despite the near freezing conditions, it didn’t stop people strolling around The Luxembourg Gardens.  Relaxing on chairs, reading the newspaper, playing tennis as if it was a spring day. 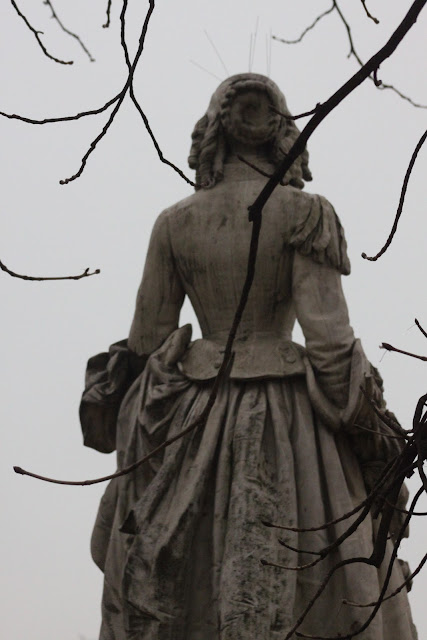 Joining the flaneurs, I braved the cold, bought a take away hot chocolate from a cart selling hot drinks and took in The Luxembourg Gardens. Very different gardens, to what people see in the summer. 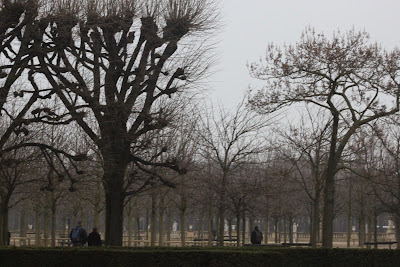 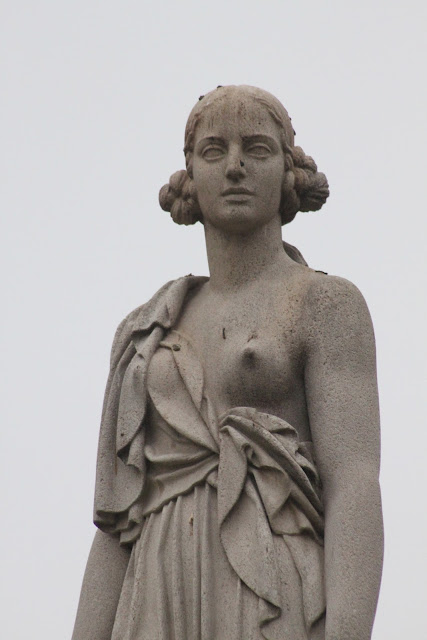 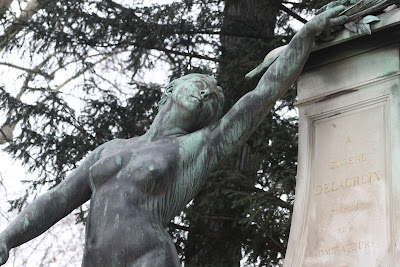 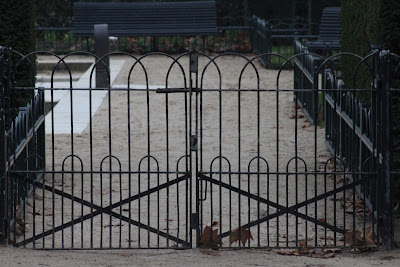 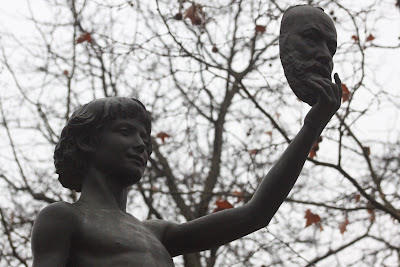 And the crowd went wild! 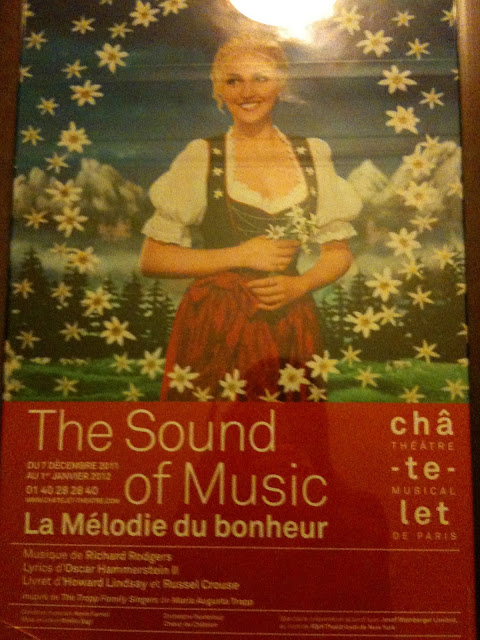 All that walking around in the cold, gave me a healthy appetite, after a wonderful dinner of Cuisse de canard, duck- at my favourite bar, Le Petit Fer a Cheval, I walked down to the Chatelet Theatre. 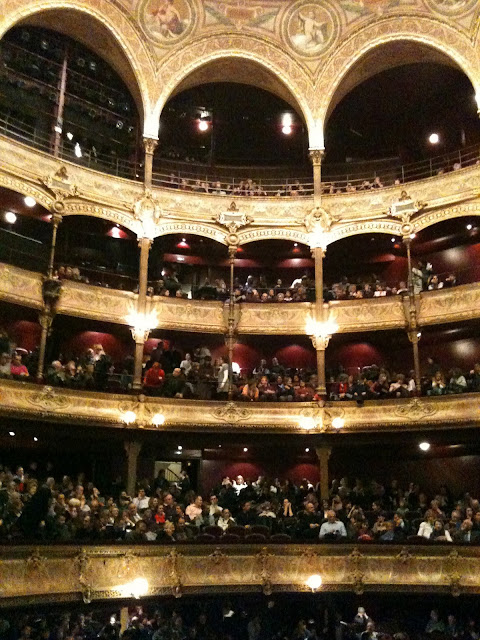 When booking the ticket to the Chatelet Theatre to see The Sound Of Music, I didn’t realise, until I arrived that I had exactly the same seat as last year when I saw My Fair Lady.

So close to the stage, on the first balcony.  Now,  I feel like it is ‘my’ seat.

The gorgeous plush gold and red theatre came alive, as the familiar songs from The Sound of Music were performed.

French audiences are wonderful to be a part of and add to the atmosphere.  It doesn’t seem to matter whether it is the ballet, a rock concert or a musical, they are there for the ride and show their appreciation. 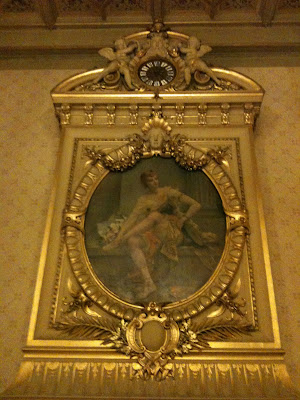 After goodness knows how many curtain calls, the orchestra played on and no one was going anywhere.  Once again, my hands were stinging,  this time not from the cold but from clapping along with the crowd.

Ray … a drop of golden sun.

2 Responses to Paris is Photogenic, in any Weather