Down and Out in Paris, with Elvis

Home » Blog » Uncategorized » Down and Out in Paris, with Elvis

An invitation for an afternoon wine, turned into an unexpected evening full of laughter and tears.

When I travel overseas,  I like to use the local transport, it is a great way of observing the average person, in this instance, the Parisian, going about their daily commute but I hadn’t ventured onto a bus since arriving in Paris.

Take the bus, it is a fun easy way to travel and rather than being underground you get to see all the sites of Paris as you go.  There is a map at each bus stop and a time indicator telling you when the next bus is due and you just need to be armed with a metro card, to validate in the machine near the door.

So I took Georgie’s advice and caught a bus.

Although Georgie insisted, I come empty handed, I decided to pop into my local wine shop and treat us to a nice bottle of wine.

Les Cave de Prague, only opened it doors recently and has a wonderful rustic charm about it, with spices on the wall and a big wooden table to sit and taste the wines on offer. The owner is charming and a pleasure to deal with and speaks very good English, in fact he visited Australia, not so long ago. 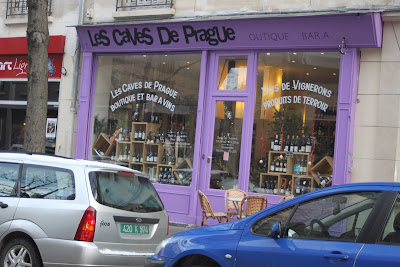 Armed with a bottle of Chateau Larouche Joubert, our afternoon drink turned into a late night of swapping stories about ourselves, discussing the destruction caused by the Queensland floods and the recent Tunisian victory.

As time breezed along and moved from afternoon into night, Georgie whipped up a fabulous salad for us to munch on, another bottle of wine was opened and perhaps another.

More wine and honesty and intimacies brought tears, I decided it was time to go home.

The walk would do me good, I could re-cap on the night, my past and my future, sober up a bit and let the cool Parisian breeze waft across my face.

The streets were quiet, not a soul about.  By the time I reached Pont Sully on the Ile Saint Louis, I was crying again and stood on the bridge to shed a few tears and breath, alone.

Out of nowhere a taxi appeared and stopped on the middle of the bridge, the driver insisted I jump in, not in the back which is usual in Paris but in the front next to him.

As he quickly cleared the front seat for me, I was confused with a mixture of feelings.  I was upset and wanted to be alone, clear my head. However maybe the cab was the better option but I was weary of his friendliness. My intuition wouldn’t be working as well as if I was sober.  Once I was seated in the warmth of the taxi, I questioned why he stopped and insisted that I get in and in the front.

He replied that he could see that I was sad and he too, was sad.

Why?  He does Elvis impersonations and forgot his lyrics!  He was upset and embarrassed.  It did make me laugh and I had to ask myself that maybe I fell over and I was dreaming this very surreal moment.  But it gets better.

My tears quickly turned into giggles.  Mindful not to hurt his feelings and laugh at his embarrassment, I had to occasionally turn my head away from him, so he would not see me holding back my giggles as he told his story.

In a very short time we arrived at my apartment, a 5 Euro cab fare, hardly worth his while.  I decided I wanted to smoke a cigarette but of course, everything is closed at this time of the night.

He jumped out of the car, explained that he will put a cover on his light, on the roof, so it indicates the cab is not free.  He will then drive me to Bastille for free in search of cigarettes.

Thoughts run through my mind, is this going to be one of those defining moments?

I don’t smoke, I should have been happy that the cab appeared from nowhere and I got home safely.  Will I be tomorrows newspaper headline; girl gets picked up, should have walked, got into a cab with some weirdo Polish, Elvis singing taxi driver, who was upset because he forgot his lyrics, the girl was never seen again.  Peut-être – Perhaps.

As we headed back to Bastille, listening to Elvis, he warns me to be careful, Bastille is not safe at this time of night.  He stops the cab and points to an open but empty brasserie, he is sure they sell cigarettes.

Upon entering with a simple bonsoir, the waiter thrusts his mobile phone in my hand and insists I give him my number.

By this stage I was asking myself if I had in fact hit my head and was lying unconscious on the bridge and dreaming the unfolding scenario. Nothing seemed real.

As I rushed out of the brasserie, cigarettes in hand and shaking my head bewildered by the waiter’s advances, I jumped into my awaiting chariot.  Maybe the Elvis singing taxi driver is my safest bet after all.

But wait it gets better.

He delivered me back to my apartment, free of charge as promised.

Before I get out of the taxi I ask him, what was the Elvis song, the one that he forgot the lyrics to.

As he leans across in front of me riffling through his glove-box, I get a little nervous as he pulls something out.

It wasn’t a gun as I had feared but a large, bejewelled pair of sunglasses!  He finds his song, dons the glasses, ensures the windows are closed tight and cranks up the volume.  In my small quiet street, as Paris sleeps, he gives me his rendition, word for word, at the top of his voice, this time remembering all the lyrics as he launches into … we are caught in a trap…

I gave him a ridiculously large tip and wished him well, giggling all the way up the stairs to my apartment.

Just when I was feeling down and out in Paris, a sunglasses wielding Elvis impersonating taxi driver cheered me up and once again showed me the kindness of strangers.