Today, being Sunday, started out pretty much like most days.  Breakfast, although I don’t remember the seagulls, maybe they weren’t around today or maybe, I am familiar with the sounds of my neighbourhood.

Red Skyped me from Australia and against my protests, insisted on a video call.  Her, with an evening Cointreau and me, with a morning cup of tea it was nice to see a familiar face, and we chatted the morning away.

Did I end up unpacking the suitcase – well kind of.

Last night, mainly out of curiosity, I checked to see if everything that I left with, was still inside.  I opened the suitcase with a feeling of anxiousness, not because I feared the contents had been stolen but it just felt like too much ‘baggage’ to deal with.

The first thing I pulled out – a belated Christmas gift.

Knowing I would not receive any Christmas gifts to open upon my arrival Christmas day.  Miss Tassie kindly and very thoughtfully presented me with a bag of four presents.  For some reason three went into my hand luggage but one ended up in the suitcase.

I munched on these and sipped French red wine as I pulled out just a few items.

There was one small item that I was curious to investigate.

A wonderful book shop owner I know, encouraged me to take a copy of a small, simple publication.  Particularly because it mentioned a dinner that is held every Sunday in man’s house called Jim.

I emailed very late last night and he replied; be there at 8pm, complete with instructions.

Before I left I felt a little nervous but there was no time for that.

Arriving at the heavy iron gate, jovial men from behind called out ‘no need to find the code we already know it’.  And so it began, I had already met three people before I passed through the gate.

Jim Haynes, is an extraordinary man.  He has rubbed shoulders and entertained the meagre to the rich and famous but nobody is meagre and that is part of his secret.  He believes in connecting people.  From all walks of life and professions.  The minute I walked through his door, he was already introducing me and others to someone near by and the ice was broken.

The room was jammed packed with people, introducing themselves, eating wonderful soup from timber bowls.

His walls are lined with art from a good friend, bookcases stacked with books, some of which he has written himself, including an autobiography.  At the heart of the room is a fantastic cooker that most of us would die for with two beautiful women cooking up a most amazing meal for the 60-70 people that crammed into his apartment.

Jim Haynes, apron on, keeping an ever watchful eye, perched on his stool near the cooker, ensuring people are connecting and having a good time.

Even the neighbours are offered dinner in compensation for the noise!

Any intrepidation I arrived with has disappeared.  I am too busy meeting people, exchanging phone numbers, learning about and meeting people.  All nationalities, all ages, all professions.

There is no sizing up, no language barrier, I heard so many accents and languages spoken as I slipped through the room.

In fact I think I am marrying an Australian man who has been living in Paris for 20 years called David, well that is what Jim Haynes has suggested!

Nestle has even made a commercial about his famous dinners!

Jim has been hosting these dinners at his home in Paris, every Sunday for the past 35 years, to anyone who wants to come along, chat, drink wine and eat.

Before leaving with a fist full of cards and phone numbers and invitations a very kind man, John, offered to walk me to the metro.  With a pit-stop at a lovely bar, I discovered he is also a published author, historian, world traveler and sometimes resident of Paris from Alaska. He made sure I caught the very last metro home.

Wow! What can I say.  A morning that started out like any other but an evening like no other. 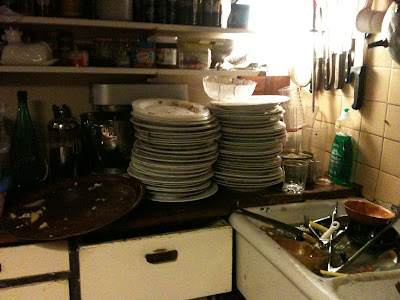