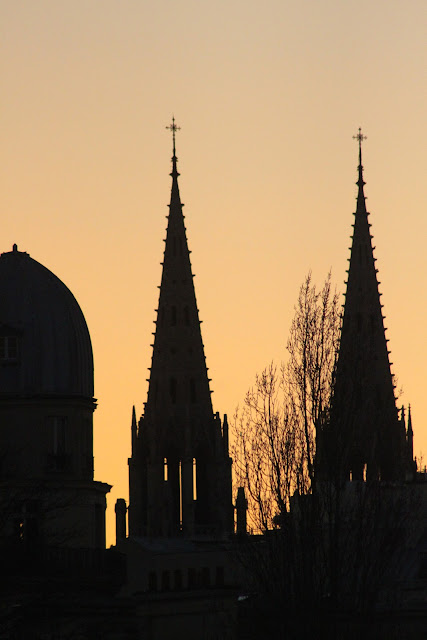 When I woke this morning, I was clutching my mobile phone and it took me a few seconds to work out why.  I needed to be up early this morning and somehow I must have turned off the alarm in my sleep and slept in.

Throwing around a lot of expletives, pacing around in circles,  I decided I was going to go anyway, late or not I was not missing out on this very special day, one I had been looking forward to.

Running to the metro I tried to call them, panting, leaving a desperate and probably unfathomable message in French.  I arrived 1 hour late to locked doors.  I rang the bell, banged on the door, nothing.

Just when I was about to give up, I saw movement inside, desperately banging on the window, I got their attention.   They unlocked the door and I entered, Le Cordon Bleu Cooking School. 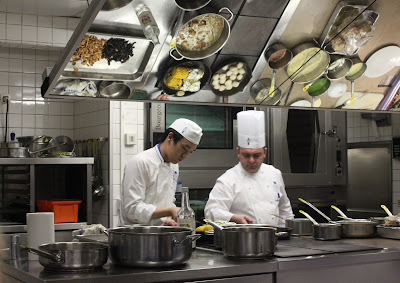 Flustered, peeling off my scarf and coat, I was lead into the hot, demonstration room.  Chef, wasn’t going to let me slip in quietly.  He said something I didn’t quite understand, I offered an apology, the interpreter – translates, don’t bother sitting down, we have almost finished.  The room roared with laughter, he was cheeky.  Sitting on the edge of my seat, glued to the mirrors and large screens that showed what he was cooking, I sighed;  I made it.

Cooking for Friends was the programme. 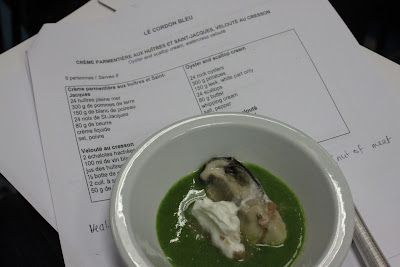 With cheeky quips, anecdotes of when he was a young chef, a couple more prods at me, he whipped up a delicious three course meal, after a small tasting and a short break we were lead into a large kitchen.

Instructed to put our aprons on, hang our tea towel from our waist and say oui chef!

Now it was our turn to make the main course and see whether we had been paying attention. 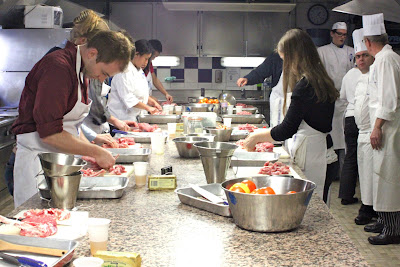 We began washing the wonderful trumpet mushrooms, it is important this is done properly.  Then we moved on to learning how to french the huge veal chop, we were each given and make a jus from the scraps and bones.

It was chaos at one point as we all quickly deglazed the pan, shouting out oui chef along the way and kept the french butter manufacturers in business. 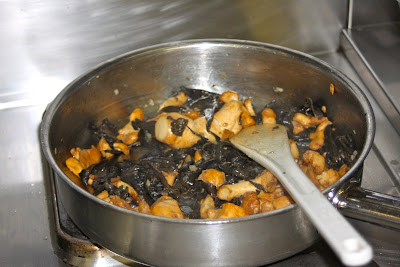 As I strained my jus over the mushrooms, chef stood by my side, with his head cocked to one side and a nod of approvement, he stuck his finger in to taste, it’s good he said with a huge grin on my face and a wiggle of my bum, I said proudly, I cooked this.

To finish we were all presented with a attendance certificate and sent downstairs to eat our creations.

I stepped out of the famous Le Cordon Bleu, cooking school with my left overs and nodded my head, that was an absolutely fantastic experience. 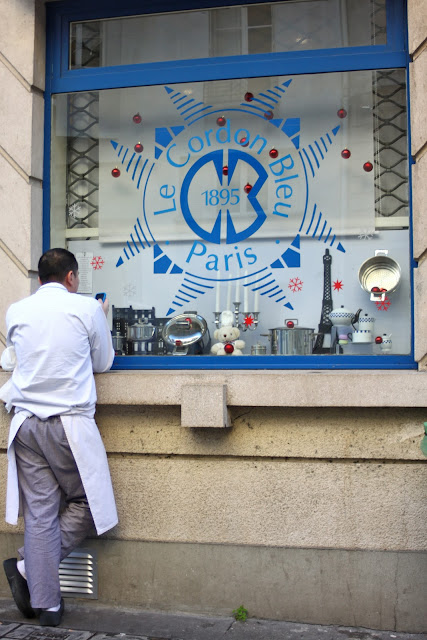 Rue de Rivoli was packed with Saturday shoppers, in search of a bargain, the sales are on.  Maybe they had driven the homeless people away.   I barely made a hole in the huge steak and nor did one of my colleagues, so I took his and my left overs, promising to pass it on to a homeless person.

Where were all the homeless people when you need one.

Finally I came across a woman – her sign read I am hungry.  I approached, would you like something to eat, yes, she says, as I handed her the still warm food, I tried to explain, I cooked this at Le Cordon Bleu, I think it went over her head.

With not one,  but two pieces of meat that were the size of  brontosaurus steaks, I hoped she may have a knife and fork, amongst her belongings.

Then as I walked away, I smiled, at least the veal chops have been expertly frenched, so she will have a nice clean bone to use as a handle, with a little skip in my step and a small giggle to myself, I thought, today she is probably the best fed homeless person in Paris, cooked at no other than Le Cordon Bleu.

What better way to finish off a wonderful day than to be invited to share a Parisian’s favourite spot.  With a bottle of Beaujolais, two plastic cups and a swiss army knife, we sat in the Cour de Carree, the courtyard of the old part of the Louvre, as luck would have it, a cellist was playing in the background. This brought tears to my eyes, I don’t want to leave Paris.

Strolling around Paris in search of a nice restaurant that appealed to both of us, was a wonderful way to start saying goodbye to Paris.  Finally we found a perfect, typically French restaurant, Le Barometre.  For the first time, I tried a traditional Parisian dish, tete de veau, veals head.

The concerned owner, wasn’t sure if I knew what I was doing but in the company of a lovely Parisian,  a day of culinary exploration and a dish I had been meaning to try, it just seemed like the right time and place to do it.

Paris is always full of surprises and new things to explore, this day was no exception but it was an exceptional day.