A Window of Faith In Paris

Home » Blog » Architecture » A Window of Faith In Paris 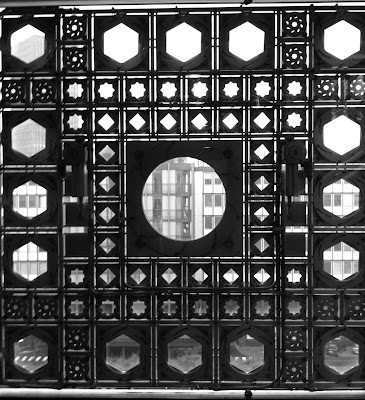 Christmas and New Year bring out all types of emotions for many.  Reflectiveness, sadness, excitement, happiness, but for a guy below my apartment, it makes him want to shout to the world at the top of his lungs.  I have no idea what he is saying but it doesn’t stop.  First Christmas and now New Years Eve.  I feel like sticking my head out my open window and telling him to shut the – up.

He has become another familiar, although unwanted, sound of my neighbourhood.

Paris was warmer today, due to the rain. The choice of weather has been, bright sunny but absolutely freezing, or warmer 7 degrees and raining.  Today it hit a whopping 12 degrees.

Being New Year’s Eve and Saturday, the streets are heaving with people.

Families dragging along their children, couples rushing with bags of champagne, young revellers, starting early, the Notre Dame seems to be ringing it’s bells every half hour and the queues to get in, have nearly blocked off the square.

I took in a bit of multiculturalism and mix of faiths today, as I did a quick whip around the 5th arrondissement.

Leaving my apartment on the 3rd arrondissement, it is almost a hop, skip and a jump to L’ile de la Cite and before I know it, I am on the left bank and in the 5th arrondissement.

I slipped inside from the rain to admire the tiny little church, that is one of the oldest in Paris, St Julien-le-Pauvre. 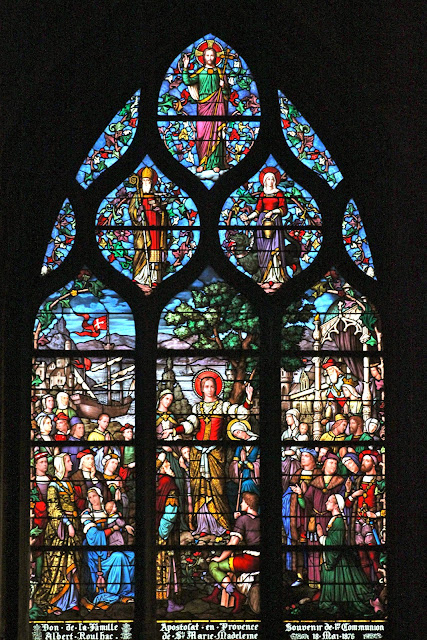 Then moved onto the very pretty. gothic,  St Severin, as luck would have it, a choir was practicing and later the organ pumped up.  Wow – a massive organ with a big sound that added to the atmosphere. 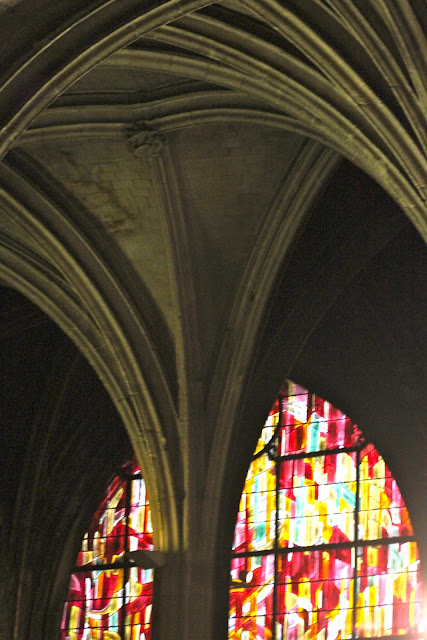 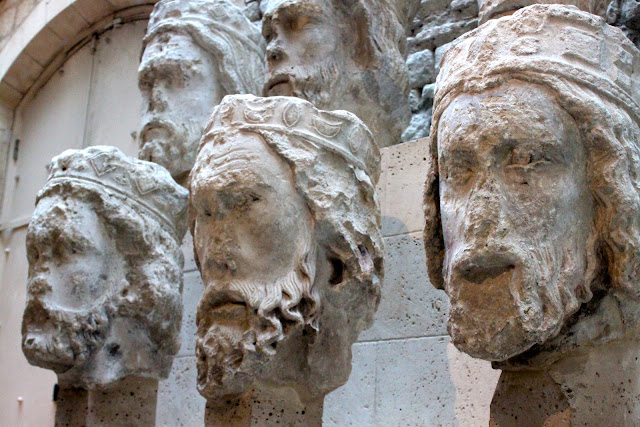 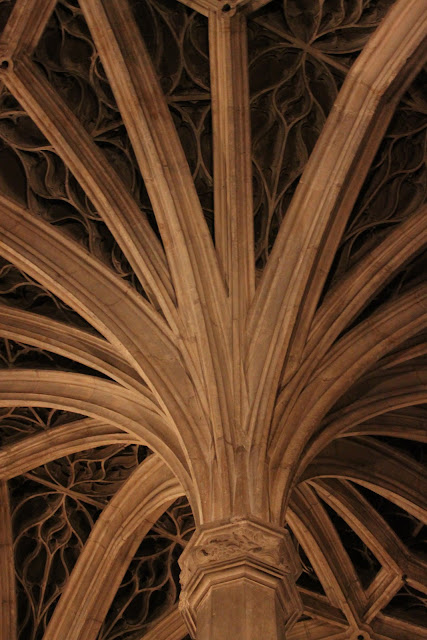 Then for something completely different, a place I have wanted to visit for some time.

Institute du Monde Arabe – The Institute of the Arab World.

A building, on first glance, could have been built last year but was in fact built in 1981.  Steel and glass, sitting on the banks of the Seine. Ultra modern it is, harsh elements is has, however there is a gentle calm and beauty about it. 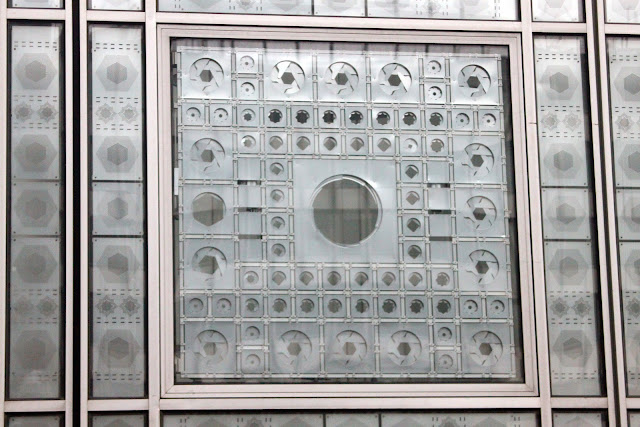 Nine floors high, although with short ceilings, glass and steel exposed lifts running up through the centre of the building, housing a museum, library and offices, it celebrates Arab nations.

The appeal of this building for me and the reason I wanted to visit, was the window shutters and the free views. 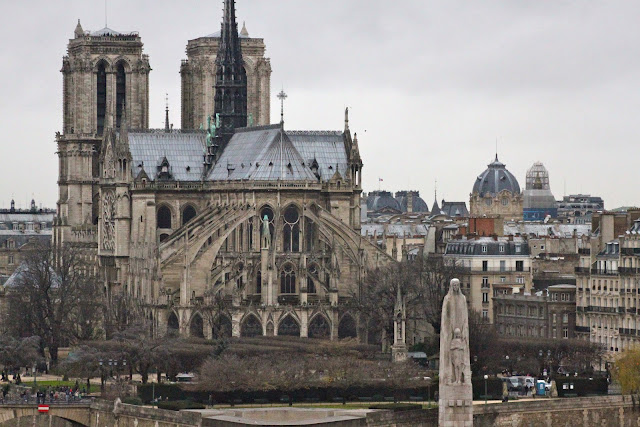 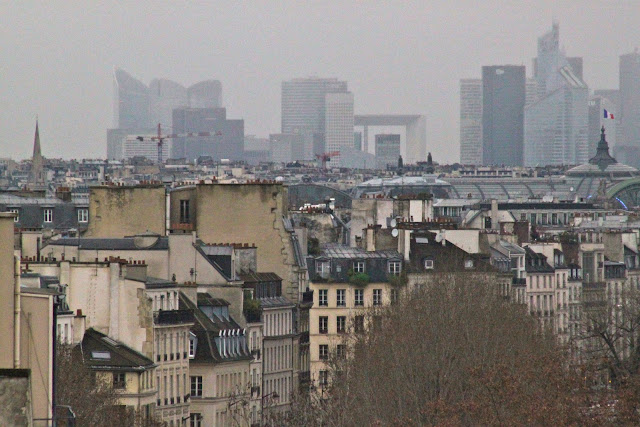 The cleverly designed shutters cover the facade of the building.  Taking its roots from Arabian design but in a very clever contemporary way.  The metal panels, sandwiched between glass, work like an eye or an aperture of a camera, automatically dilate or close up depending on the sunshine. 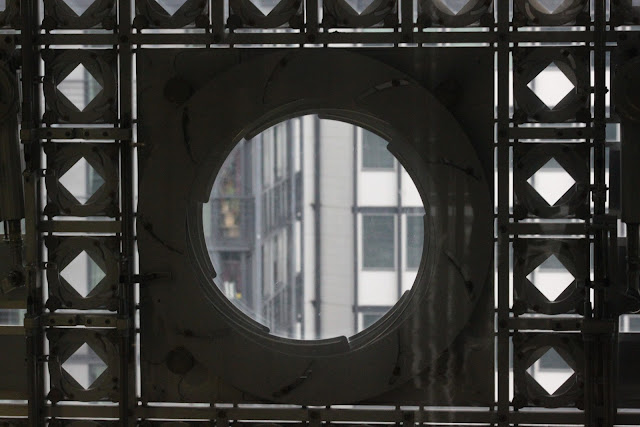 There is a reasonably priced restaurant,  located on the 9th floor, with a large terrace, where you can take in a birds eye view of the back of the Notre Dame and the Seine.

By the time I reached the Institute du Monde Arabe, the restaurant was closed in preparation for New Year’s Eve celebrations but I had a delicious meal of humous, chicken and tabbouleh, in the cafe on the ground floor.  Fitting, considering I was visiting a place that celebrates the Arab World.

Now back by the Seine, the right bank was beckoning.  I decided to cross the river and go home.

After an organ recital, stained glass windows and a window into the modern Arabian world, a mix of religion and cultures, was what I found in the 5th arrondissement.

As I pushed my way through the crowds past the Notre Dame, with her bells ringing.  I stepped over the other side of the river,  to the right bank.  It always feels like coming home as I do this, maybe I am just a right bank girl.

One Response to A Window of Faith In Paris